A Mountain of Regulation?: Assessing Barriers to Work in West Virginia

Click Here to Open the PDF in a New Tab

WHY DOES OCCUPATIONAL LICENSING MATTER IN THE LAND OF ENCHANTMENT?
As the labor market continues to strengthen across the United States, New Mexico lags behind. In October of 2018 according to the Bureau of Labor Statistics, the unemployment rate in New Mexico was 4.6{3bf985da70e94b63e36288b9d3c5d1f33d064a496cdc283b5af11e955f8a5cb0}–almost a full percentage point higher than the national average and in bordering state Texas (both at 3.7{3bf985da70e94b63e36288b9d3c5d1f33d064a496cdc283b5af11e955f8a5cb0}). Furthermore, New Mexico has lagged behind its neighbors in job creation as well, increasing employment from December 2017 to December 2018 by 2.4 percent, compared to a 3.4 percent and 3.2 percent increase in Arizona and Texas respectively.[1] Although there are a number of factors that might be contributing to this difference an often overlooked factor is occupational licensing.

Occupational licensing establishes laws that require aspiring workers to obtain a government permission slip to work. To obtain this permission slip, individuals must pass exams, pay fees to the government, complete minimum levels of education and training, and meet a variety of other entry requirements.

By making it harder for individuals to work, individuals may have a harder time obtaining employment or may be discouraged from participating in the job market altogether. 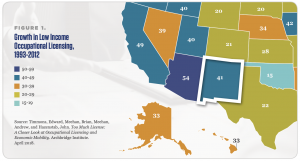 LICENSING MAKES THE AMERICAN DREAM BECOME A NIGHTMARE
In recently published research by the Archbridge Institute, we document how occupational licensing may be ending the dreams of citizens in New Mexico of entering a new career and climbing the economic ladder.[6] Between 1993 and 2012, New Mexico added licensing requirements for 41 low- and moderate-income occupations—10 more than the national average of 31. Relative to this average, we estimate that growth in occupational licensing in New Mexico is associated with a 4.6{3bf985da70e94b63e36288b9d3c5d1f33d064a496cdc283b5af11e955f8a5cb0} reduction in economic mobility and a 10.7{3bf985da70e94b63e36288b9d3c5d1f33d064a496cdc283b5af11e955f8a5cb0} increase in income inequality. Growth in occupational licensing is associated with fewer opportunities for workers to earn more than their parents and a widening of the gap between the rich and poor. Occupational licensing limits opportunities for employment and prevents hard working New Mexico residents from achieving the American Dream.

During her term, former Governor Susana Martinez made strides to mitigate the harmful effects of occupational licensing for New Mexicans. In July of 2018, Martinez issued an executive order that instructed state boards and commissions to review licensing requirements and develop recommendations to increase economic opportunity.[7] This was followed by a more comprehensive executive order, issued in October of 2018, that included several provisions aimed at easing the burden of occupational licensing.[8] Among the most significant provisions of the order was the “consumer choice” provision, which would allow non-licensed practitioners to provide their services as long as customers were informed of the lack of a license. Although the provision provides lawmakers with a roadmap for reform, without further legislative action, it is unable to be fully implemented.[9]

MOVING FORWARD: THE OCCUPATIONAL LICENSING CONSUMER CHOICE ACT
This proposed legislation is designed to reduce the barriers to enter the labor market and expand consumer choice. Professionals will be able to offer their services without obtaining a license to practice in the state, provided that they notify potential customers. Customers will be able to choose a service provider whose price and ability match their needs, irrespective of their licensure status. In effect, the law turns licenses into a form of voluntary certification. Professionals are able to signal their quality, education, and experience by obtaining a license, while competition will be increased with the addition of low cost providers.

Professionals and consumers both benefit from this legislation. It allows lower skilled and educated workers to begin practicing, helping ease their entry into the labor market and allowing them to build up their skills to have a successful career. The law also encourages interstate mobility. Workers can move to New Mexico and begin practicing immediately, rather than wasting time and money retraining, reeducating, and retesting.

By requiring the notification of licensure status, the law continues to inform consumers of the quality of the professional. Increasing the number of professionals will increase competition, helping to lower the prices that consumers pay for their services. Finally, New Mexicans benefit by shifting the focus of regulators to health and safety rather than enforcing licensing requirements.

For too long, occupational licensing has been restricting opportunities for people in New Mexico. Common sense reform should be implemented to improve the lives of the citizens of New Mexico and help restore the American Dream of prosperity.

APPENDIX A: THE OCCUPATIONAL LICENSING CONSUMER CHOICE ACT
SUMMARY
The Occupational Licensing Consumer Choice Act (“the Act”) is model legislation that provides consumers with the right to choose a worker who best serves their needs irrespective of whether that person holds an occupational license from the state of [STATE]. It provides that business owners, entrepreneurs, and workers in professions otherwise licensed by the state of [STATE] may operate without an occupational license if they disclose that fact to prospective consumers. Workers and entrepreneurs subject to regulatory enforcement may assert such disclosure as a defense to action related to enforcement of occupational licensing laws and regulations.

SECTION 1
PURPOSE
THE PURPOSE OF THE ACT IS TO:
A. Protect workers from unnecessary and burdensome licensing regulations that do not address a legitimate, evidence-based, health and safety issue in the least burdensome way.

B. Increase market competition by allowing consumers to make informed decisions in hiring the workers they choose;

C. Empower industry groups, trade organizations, and similar private associations to self-regulate without the participation of government; and

D. Make regulators more efficient by shifting resources away from enforcing occupational licensure to better focus on regulating for the purposes of protecting health and safety.

SECTION 2
PURPOSE
THE FOLLOWING DEFINITIONS APPLY IN THIS ACT:
A. “Lawful occupation” means a service, profession, or line of work in the sale of goods or services that is not otherwise illegal irrespective of whether the occupation requires an occupational license in order to operate.

B. “Occupational license” means any requirement under a state authority to obtain a license, permit, registration, certificate, or other evidence of state authority in order to work in a lawful occupation.

C. “State authority” means any state agency, department, board, commission, or other governing body with state authority, and includes executive and administrative officers of such bodies.

D. “Licensing regulation” means any statute, rule, ordinance, policy, enforcement practice or action, or any other action by a state authority to require a license in order to work in a lawful occupation.

E. “Agreement for service” means a verbal or written contract to provide the services of a lawful occupation for consideration.

C. A state authority must disclose on its internet website and all written or digital and online application forms for occupational licenses that a person has a right to operate in the state of [STATE] without an occupational license otherwise required if a non-license disclosure is made to potential consumers before entering an agreement for service.

D. This Act shall not be construed to impose any requirement on workers engaged in a lawful occupation that is not the subject of licensing regulation by a state authority.

SECTION 4
DEFENSE AND RELIEF
A. It is a defense to any licensing regulation, civil or criminal, by a state authority for the purpose of enforcing an occupational license requirement on a person engaged in a lawful occupation if the person properly made a non-license disclosure in the agreement for service that is the subject of such enforcement.

B. Production of a non-license disclosure signed by both parties shall require immediate dismissal with prejudice of any licensing regulation, civil or criminal, by a state authority for the purpose of enforcing an occupational license requirement on a person engaged in a lawful occupation.

C. A person that prevails in asserting a defense under Section 4(A) shall be entitled to reasonable costs and attorney’s fees incurred in asserting such a defense.

ACKNOWLEDGEMENT The Archbridge Institute and the Rio Grande Foundation would like to thank the Texas Conservative Coalition Research Institute and the Institute for Justice for their work in crafting the Occupational Licensing Consumer Choice Act and allowing its publication here.

[3] Kleiner, Morris and Evgeny Vorotnikov. “At What Cost,” Institute for Justice, November 2018, https://ij.org/report/at-what-cost

Released by the Archbridge Institute and the Rio Grande Foundation